The Great Sphinx of Egypt

One of the Egypt's national wonders, and one of the greatest wonders of the world, is the Sphinx. It remains the world's largest stone figure since it's creation. The Sphinx is 73 metres long, 20 metres high and 19 metre wide. It was curved out of a solid piece of limestone outcropping. This limestone has an interesting geology, and that it's hardness changes as elevation changes.

It has been considered by many to be built during the Old Kingdom of Egypt, but there is no inscription or record as to who built  the Sphinx or the date of it's construction. Any suggestion to the origin of the Sphinx , can only be based on circumstantial evidence.

The ancient Egyptians never called the Sphinx by that name, in fact no name was attached to the Sphinx until the New Kingdom. It was then called "Horus of the Horizon" possible due to the Sphinx looking directly east towards the Horizon, as if waiting for the Sun to rise. This name can be verified by a stele found at the foot of the Sphinx, that is often refereed to as the "dream stele". In the writings from the "dream stele", a young prince falls asleep under the Great Sphinx, after taking a walk. He then has a dream in which the God of the Sphinx promises to make him King if he digs him out of the sand. The young prince then digs out the Sphinx uncovering it's paws and  then places a stele at the feet of the Great statue to remember the event.

In fact the Great Sphinx was buried to it's neck for most of it's existence. It wasn't until 1936 that the statue was completely uncovered, by an explorer Emile Baraize. There is evidence to support that after King Cambyses and  the Persians in 525 BC  conquered Egypt, that the Sphinx would have fallen into neglect until uncovered in 1936. Many now question the massive amounts of erosion on the body of the Sphinx, when for the most part of the Sphinx's existence, it was buried. Would this not indicate a far older Sphinx than previously thought?

Photo from the early 1870's, some excavations were done.

Was the Sphinx a Lion

The word, 'Sphinx" is from Greek mythology, not Egyptian, and  the statue only assumed this name in modern times.  The Egyptians made NO mention that this huge monolithic structure was even a lion, or any animal for that matter. The idea that the Sphinx was a Lion was strictly a modern vision of the figure.

In ancient Egyptian's mythology, the Egyptians had a lion goddess named Sekhmet. Sekhmet had the body of a woman and the head of a lion. She was a warrior goddess. On top of her headdress was a solar disk. 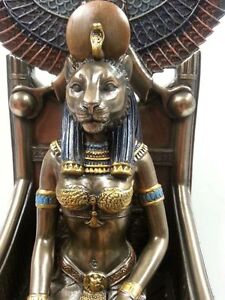 The other Lion goddess of the Egyptians was Ammut. Ammut had the head of a crocodile and the body of a lion and hippopotamus, illustrated above.


Neither of these two Lion goddess's seem in any way related to the Sphinx.

How did the Egyptians represent Lions in their reliefs and mythological art? 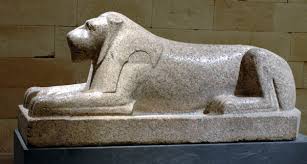 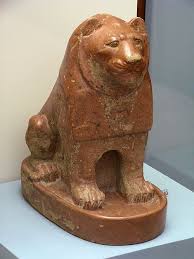 Noted above are three forms that the Egyptians depicted Lions in their art. The only art form that closely resembles the Spinx is the first one. Please note that all these lions have NO necks. There heads are attached almost to their shoulders as in nature. The first Lion pose in a laying position is very rare in ancient Egyptian art. Almost all are more related to the side pose,(2nd fig.) which again is true to nature.

Now compare that to the Sphinx. 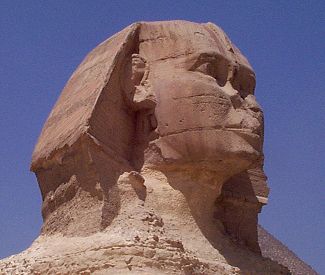 The above picture of the Sphinx shows a well defined neck. A neck that held the head of the Sphinx completely upright and erect. In the Egyptian depiction of the Lion, the Lion's head is straight ahead of the shoulders, and does not sit upright, which is contrary to the Sphinx.

So the question is what is the Sphinx, and what did it represent to the Egyptians?

Anubis, the Jackal God of the Egyptians, was one of the most important and well documented Gods of the Egyptians. He was depicted in almost every scene in Egyptian reliefs and paintings. The High Priest would wear his headdress, that depicted the jackal, on certain occasions.

Anubis was first mentioned in the Old Kingdom on the pyramid text, as he was closely associated with the burial of the Kings of Egypt. Anubis is the protector of the dead and their mummification. Anubis was the protector of the dead on their journey into after life. Anubis then fits perfectly into the surrounding architecture of the area. The three pyramids. He's protecting the dead Kings of Egypt on their journey into afterlife.

Noted below how Anubis is depicted in Egyptian art form. 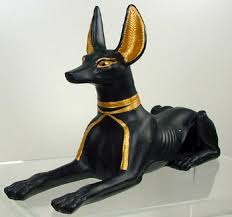 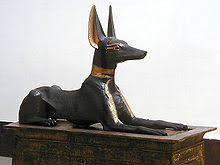 Anubis is always depicted in this laying state. Notice that Anubis has a neck that holds the head of the jackal upright exactly like the Sphinx.

Now why would the "dream stele", call the Sphinx " Horus of the Horizon". Anubis and Horus were 1/2 brothers, and later in Egyptian mythology these two Gods were joined and eventually Anubis is replaced by Horus. This was possibly done as a political move by the priests. It is therefore understandable that the "dream stele" would name the Sphinx, Horus of the Horizon.

The most intriguing question is now what happened to the head of the Jackal of Anubis? It would seem that as the importance of Anubis diminished it led to a new King of Egypt to super impose his facial image on the body of the Jackal. It would appear that this King came from the Middle Kingdom.

A German Archaeologist, Ludwig Barchardt, prior to the excavation of the Sphinx, was able to stand in front of the Sphinx's head and do an in-depth study. He determined by the style of how the eyes were painted in a stylized stripes, that the Sphinx's head had to be from the Middle Kingdom. He also noted the stripe patterns of the headdress worn by the Sphinx. This was only worn by a King of Egypt, and this King could only be from the middle kingdom. The pattern of stripes on the Headdress defined the period which that King reigned.

We  know the Sphinx was much older than the Egyptian Middle Kingdom, so this all lends itself to the theory that a King from the Middle Kingdom, did a massive amount of architectural renovation on the head of the Sphinx. Who was this King?? There is the usual suspects.

1st. There is an actual Sphinx carved from pink granite that has been found with Amenemhat 2 name inscribed in it. This Sphinx now resides in the Louvre in Paris. This art form, became more popular years later following the 18th dynasty.

Take note that the body of the statue is actually a Lion, and it has NO neck. The head is attached directly forward of the shoulders. This would lend itself to believe that after Amenemhat 2 had this statue commissioned, he later got the idea to transform the Great Sphinx, using a similar design. A grander scale of the same image.

2nd. The image itself resembles the Sphinx's facial features. Notice the overly large size of the eyes and the expression on the mouth, and the size of the nose. (Refer back to the above image) It's almost an enlarged baby face.  These features are almost identical to the features on the Sphinx.

This all points to the fact that our preconceived ideas of the Sphinx are wrong.

Posted by Straw Walker at 16:14 No comments: