The very first technology that man saw necessary to begin his existence was the invention of the calendar.. Even before man saw the need of a written language, a written code of laws, or the knowledge of husbandry, and agriculture, man first needed a calendar. A calendar would relate man to the beginning of the new year. This point in time resulted in the preparation of soils for the seeding of crops, and the movement of flocks to pasture, and the breeding of these flocks This was all dependent on determining the first day of the new year.

From Akkadian calendars on, calendars were lunar, but the beginning of each new year was a solar event.The spring equinox. The Akkadian and later lunar calendars chose the new moon closest to the spring equinox as the first day of the new year.  The reason that Easter and Passover (Nissan 14th) occurs on different dates each year, is that the new moon appears at a different solar date, on our present day calendars, as our present day calendars are solar and not lunar.

The Sumerians apparently dated their calendar somewhat different to later lunar calendars. They chose an event to date the beginning of their lunar calendar that would have a profound effect. It would give us the ability to determine the dating of these calendars. The beginning of the first day of their new year, was the combination of the spring equinox and the setting of a constellation (Zodiac). The Sumerians used the cross of equal lengths, when indicating the spring equinox in a relief. They often drew this cross in conjunction with it's appropriate Zodiac symbol. 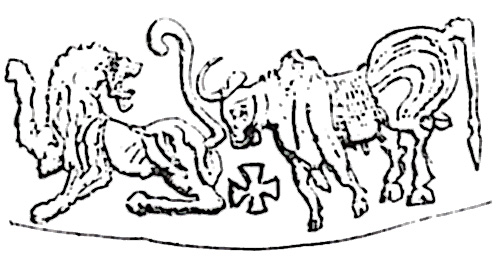 For those of us that saw the musical "Hair" you might remember the song "Age of Aquarius". This age will actually begin in the year 2100AD. The reason for this is that the earth's rotation is not perfect, but it wobbles on it's north/south axis. For a wobble to complete one revolution it takes 25,920 years; therefore each age of a Zodiac constellation takes 2160 years. It then becomes possible to backdate man's earliest calendars if we know the Zodiac that was visible during the spring equinox. The first Zodiac that was acknowledged by the Sumerians was the Lion  This is seen on a early Sumerian tablet, which can be seen today in the Berlin Museum. The Lion sign occurred between 8700 BC and 10,860 BC. This would have been when mankind first became aware of himself and his social surroundings. Man would have been building villages and practising farming, in large social groups.

The Sumerians left many clay tablets dealing with a certain period in their civilisation. That Zodiac period was the Age of Taurus, which period ran from 4380 BC. to 2220 BC. This period in Man's development might be call the Renascence of ancient man  This was the period that the Sumerians developed their written language, law codes and legal system, intensive irrigated farming practises, and extensive building program of temples, including the building of their Ziggurats. It was their Alpha and Omega period. Their Zenith and their conclusion, for soon after they were destroyed by the Akkadians.

It wasn't just the Sumerians who had this period of intellectual growth, but Egypt and many surrounding countries throughout this period exhibited these giant steps of development.,.

Posted by Straw Walker at 20:48 No comments: