Azazel and the Book of Enoch

The Book of Enoch was an ancient manuscript found in caves in Ethiopia, mostly written in a language called Geez, but some text is also in Aramaic, Greek and Latin

The text relates an ancient pre-flood story, that entails 200 Watchers, or angels that make a pact amoungst themselves. This pact involves taking for themselves the most desirable women of the earth, and mating with them. It also involves using the secrets of heaven and teaching mankind these secrets, that were never to be known to man.

These Watchers, had leaders, leaders of 10 and counsel leaders. The most important of the watchers had names that were recorded by Enoch. Semjaza was their leader, and he gathered the Watchers together on Mount Hermon, an ancient place of gathering, where they formulated their plan and swore to it.

The 200 Watchers descended upon mankind, and cohabited with the women of the earth, whom bore them giants. Nefilim in the Bible. Giants of tremendous size. These giants ate all the produce of man, then turned on mankind itself and devoured man and animal alike. The Watches not only bred with the women of mankind, but also bred with animals, that produced what Enoch calls monsters. The greatest of these monsters was named Leviathan. Mankind and animals alike are not able to inter bred between species, because our DNA is so dissimilar, but apparently the Watchers DNA was able to bred with numerous species, some completely different genetically. In Sumerian art there is often depictions of a 1/2 man monsters and also the famous Minotaur of Greece is similar in content. Could these be the results of monsters named in the Book of Enoch.

The names of the leaders of the 200 Watchers, (notice the similarity to the 300 Annunaki in the Sumerian text that came down to earth to administer the fate of man), are listed in the Book of Enoch. Danel, Turel, Rameel are a few, and most of their names end in "el" , which means god.  El was the ancient god of the land of Canaan. The most famous and a counsel to the 200 was Azazel. His name would mean God of hardening or God of strengthening. Azazel brought to earth the secret art of strengthening or the hardening of metal, to make implements of war. This allowed mankind to make war on each other, and bring destruction upon the earth.

In  Chapter 8 of the Book of Enoch it states;

And Azazel taught men to make swords, and knives, and shields, and breastplates, and made known to them the metals of the earth and the art of working them,

Soon the heavens saw what the 200 Watchers had done to earthly man, and the destruction that was brought upon mankind, and they told this to God (Anu in Sumerian).

Thou seest what Azazel hath done, who hath taught all unrighteousness on earth and revealed the eternal secrets which were (preserved) in heaven, which men were striving to learn: And Semjaza, to whom Thou hast given authority to bear rule over his associates. And they have gone to the daughters of men upon the earth, and have slept with the women, and have defiled themselves, and revealed to them all kinds of sins. And the women have borne giants,

Then the Lord God decreed, and spoke a command to Rafael his angle.

And again the Lord said to Raphael: 'Bind Azazel hand and foot, and cast him into the darkness: and make an opening in the desert, which is in Dudael, and cast him therein. And place upon him rough and jagged rocks, and cover him with darkness, and let him abide there for ever, and cover his face that he may not see light.

There is a great battle that takes place at a site that was called Aryan-Waizan and many of the giants are killed, along with the death of angles including apparently Rafael. There is two great giants on earth that are brothers, and they seem to dominate the affairs of the other giants and man. There names are Ohya and Hahya/Ahya. These two giants have no equal and are seen as rulers of earth, and their rule would last forever.

Ohya and Leviathan and Rafael are involved in a long protracted battle, in which all three disappear. This is a tale that apparently is retold many times to children using animals in place of giants and a monster.

In Chapter 10 of the Book of Enoch it states that Semjaza will be bound and has to watch the slaughter of his children. The 200 are then imprisoned until judgement. This is clearly very similar to The Book of Jeremiah when the King of Babylon Nebuchadnezzar, binds the King of Judea, and forces him to watch as his children are all put to death, then he is blinded, and put into ever lasting darkness, when he is taken to Babylon where he is imprisoned for the rest of his life.

This is at the ancient location of Riblah of Hamath. Riblah was an ancient crossroad, of three major routes. The road south went into the land of Judea, the route north into modern day Syria, and the route east went to Babylon and the valley of Sumer. Just as modern armies seizes important military crossroads, ancient armies did the same. The King of Babylon and a small army held this northern crossroad while his main invading army crushed Judea. This same military tactic was used earlier by the Egyptians when they conquered Judea. 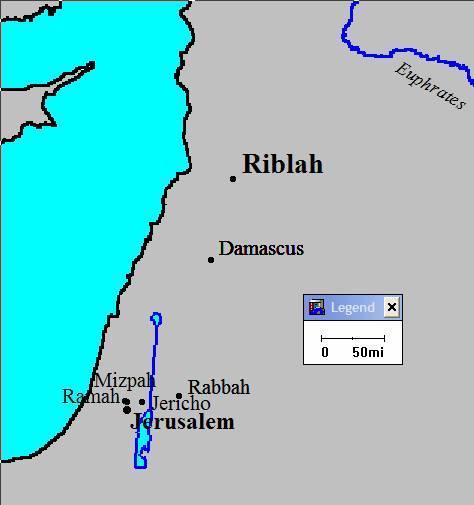 Did Rafael hold this crossroad, not allowing the giants to escape from the region of Lebanon, only too find himself in battle with the great giant Ohya and the monster Leviathan? Today Riblah is nothing more than a old grave site, but does this have significance to the battle of giants and gods.Were many of the giants rounded up and slaughtered before the Watchers at this site?

The ancient gods were very vindictive and vengeful, and would take this opportunity to repeat what they felt as a personal wrong against their seed. They would have used Nebuchadnezzar to repeat this act at the same location to reinforce what was done to them and their seed, centuries earlier. It's also possible that some of the giants were buried there at Riblah, as evidence that even today it's a large ancient grave site.

The ancient Greeks also told of this great battle between the Gods and Giants. This Greek bronze shows a giant throwing large rocks in their effort to overthrow the gods. The Viking's beliefs also included giants fighting the gods in their attempt to destroy Asgard, the home of the gods, but the gods fought back using a great hammer.
. 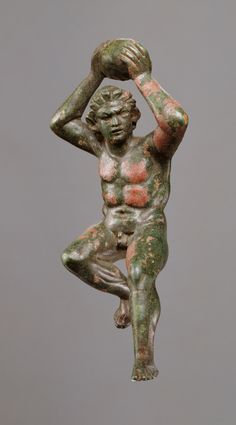 This ancient battle between gods and giants has been told down through the centuries, by many different peoples.

The question that many ask is what happened to Azazel? The children of these gods that were left after the battle, the Nefilim, now would gather their dead and bury them. Then soon after, build a memorial for the en-captured Azazel. This was built at Baalbek. The size and immensity no man has seen or duplicated. Below is a stone that was never completed still lays near the site. German archaeologists recently found in February of 2015,  after extensive digging, the largest stone ever unearthed, which weighed in excess of 1650  long tons. This stone was found at Baalbek. 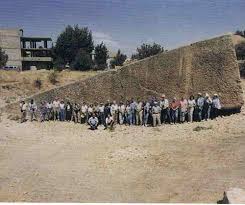 The ancient tales surrounding Baalbek is that it was built by giants prior to the flood, which coincides with the Book of Enoch. It's also possible that this site that stands as a memorial, is the site where Azazel is held in captivity in Dudael. In the text above, rocks are placed over his entombment. Could these be the giant stones at Baalbek that seal his exit?  Buried deep below this site, and bound is Azazel.