A noted astronomer Vera Rubin, was able to detect with accuracy an unusual phenomenon. Galaxies rotate around their central mass quite differently than our planets orbit around our Sun in our solar system.

In our solar system planets are free to orbit independently of each other, (minus planetary gravitational tugs) and follow the physical laws of nature as outlined by Kepler and Newton. The further out planets orbit the Sun the slower they travel. As an example using Pluto. Pluto's orbital speed is a mere fast walk compared to the blistering speed of Mercury's orbit.

In Rubin's detailed analysis, galaxies seem to break the laws of known physics. The further out you travel in a galaxy, orbital speed slightly increases. Also conversely the closer to the centre of the galaxy the slower galaxy is orbiting.

These results are not what would have been expected.

Astronomers were quick to explain this seemingly contradiction in scientific law. The resulting conclusion was there had to been an unknown and therefore an unseen mass accounting for this irregularity in predicted results. Hence Dark Matter was postulated and has been accepted into the scientific community. Why the discrepancy in our solar system v.s. a galaxy?

There is three basic errors made in comparing the two systems.

1) The planets in our solar system orbit independently of each other while the star systems in a galaxy do not. In fact they are tied to each other.
2) The closest star systems in a galaxy are nearly fixed to the central mass while those further out from the centre of the star systems are being dragged or pulled along. This causes the whole system as a whole to rotate in one direction This is not in any way similar to the independent orbiting of our planets around the Sun which follow the laws of angular conservation.
3)  The central mass of a galaxy is not as described by Einstein theorists. A mass so great that light cannot escape causing a singularity. The central mass of a galaxy has two or more immense pulsars orbiting extremely fast in a very tight inner orbit. These fast orbiting pulsars are what causes the pulling action and rotation on the star systems in their respective galaxies.

Pulsars are different than any known object. They have the ability to contract space in a very pronounced manner. This contraction of space, scientifically reported in "03, is what causes the orbital behavior of a galaxy. 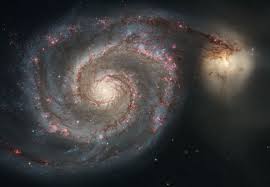 In the whirlpool galaxy above, note that the stars are seemingly attached like spokes on a wheel around the spinning central mass.This is not similar in anyway to our orbiting planets.
As these stars are being dragged along in unison those further out from the centre will possess higher orbital velocities. Just like a whip is being rotated over your head. The tip of the whip will travel at higher speeds.

The number of Pulsars at the centre of a galaxy can actually be determined, by simply counting the spokes on the wheel of the spinning galaxy. Each Pulsars is accounting for a similar number of star systems in it's grasp.

A galaxy that seems to have a continuous rotation of star systems indicates the degree how tight the Pulsars are orbiting and at what velocity.

Why does the rotational orbits of galaxies not follow the conservation of angular motion? Simply because the Pulsars in the centre of the Black Holes are too strong. Unlike our Sun, Pulsars do not release mass (star clusters)  into an elliptical orbit, but continue to drag them ever closer to their centre.

By using a computer simulation of orbital velocity  and distances between star clusters as they approach the centre of a galaxy, are both approaching zero. Believe what you observe.

There can only be one conclusion. The centre of the galaxy is contracting space and slowing time.

Galaxy rotational rates do NOT contravene any scientific law.
Therefore Dark Matter does NOT exist.

Pulsars are naturally attracted to each other. Their huge spinning magnetic field contracts space and slows time, which inevitably draws two Pulsars together into an ever stronger and decaying orbit. Any star cluster in the region will also be drawn into this ever more powerful dance.

This is the beginning formation of a black hole and how a galaxy is initially formed.

For further reading: Blog. Pulsars: the Universe's most Powerful Object

Pulsars; The Universe's Most Powerful Object


Pulsars
Pulsars first discovered in the mid '60s, are very dense stars that produce extremely strong magnetic fields, up to a 1010 tesla field . Their magnetic poles (from the illustration) are not aligned with their axis of rotation, which as they rotate on this axis, casts their radiation emissions, in a wide sweep across the Universe. This may hit the Earth and be detected. It has been found that these pulses of radiation have a precise time interval as the star rotates each time.

This magnetic field is so strong it will not allow life to exist. The field strength is able to even distort matter itself. Hydrogen and Helium atoms are distorted in a vacuum space that becomes polarized. This polarization of space produces a birefringent effect. In 1997 Nodland and Ralston found that the universe has an optical axis, therefore a circularly birefringent. The universe behaves as a cosmic "quartz crystal" as was used by ancient Viking seafarers. Space may itself be birefringent..

Atomic atoms  then extend into rod shapes as reported by an article in '03 Scientific American. The Hydrogen atom becomes a spindle 200 times narrower than it's normal shape.

As seen by this crystal, as illustrated above, the object appears twice.

Could not this be the reason for Einstein's explanation of Gravitational Lensing. Distant grouping of stars are seen twice when viewed through a telescope.
The first gravitational lens was found in 1979 by Dennis Walsh, Robert F. Carswell and Ray J. Weymann, who identified the double quasar Q0957+561 as a double image of one and the same distant quasar, produced by a gravitational lens. The effect of double refraction can been seen in the illustration above, due to a Pulsars extremely strong spinning magnetic field polarizing space...this effect that has long been determined to be from Einstein's Mass/Gravity theory.

University of Peking, China recently put forth this interesting theory;
It is suggesting that a number of Pulsars are orbiting near the centre of a galaxy, and may be causing the distortion in time space that has been attributed to Einsteins Black Holes. Black Holes have never seen but their effects are observed. Theories suggest their mass is so large, no light can emit it's surface,
Are the Pulsar's massive spinning magnetic fields responsible for this distorting time space?

Pulars, if existing and detectable in the immediate vicinity of the massive black hole (MBH) in the Galactic center (GC), may be used as a superb tool to probe both the environment and the metric of the central MBH. The recent discovery of a magnetized pulsar in the GC suggests that many more pulsars should exist near the MBH. In this paper, we estimate the number and the orbital distribution of pulsars in the vicinity of the MBH in the GC by assuming that the pulsar progenitors, similar to the GC S-stars, were captured to orbits tightly bound to the MBH through the tidal breakup of stellar binaries. We use the current observations on both the GC S-stars and the hypervelocity stars to calibrate the injection rate(s) of and the dynamical model(s) for the stellar binaries. By including the relaxation processes, supernova kicks, and gravitational wave radiation in our simulations, we estimate that \~{}97-190 (9-14) pulsars may presently orbit the central MBH with semimajor axes łt}=4000 AU (łt}=1000 AU), which is compatible with the current observational constraints on the number of the GC pulsars. The semimajor axis and the pericenter distance of the pulsar closest to the central MBH are probably in the range of \~{}120-460 AU and \~{}2-230 AU, respectively. Future telescopes, such as the Square Kilometer Array, may be able to detect a significant number of pulsars with semimajor axis smaller than a few thousand AU in the GC. Long-term monitoring of these pulsars would be helpful in constraining both the environment and the metric of the central MBH. Our preferred model also results in about ten hyperfast pulsars with velocity {\gt}\~{} 1500 km s moving away from the Milky Way.

Does this alter our view, of the Universe?

It would indicate that a magnetic field in a certain set of  circumstance, can create a phenomenon that  contracts time and space.
Now mankind needs to artificially reproduce this in a lab.

To reproduce the magnetic field of a Pulsar is not within the realm of our ability, nor would we attempt such a project fully knowing the detrimental effects of such a force.
But; water can easily be polarized and when using a spinning magnetic field it will produce a spinning polarization of the water molecule. When water is polarized the Hydrogen atoms take an opposite charge to the Oxygen atom, which in effect can weaken or strengthen the molecule depending on external forces. When in a spinning magnetic field, certain sub atomic particles spin in the same direction as the field.

Now by placing a diamagnetic material perpendicular to the field, a magnetic field "mirror" is produced. Bismuth and Mercury are the two strongest diamagnetic elements known.

This in effect duplicates what a Pulsar does in space..

Time is the most valuable commodity in the Universe. If altering time can be artificially created then all other commodities have exactly no value. Distance traveled in the Universe becomes a moot point if the time required is negligible. Turn time into a commodity.