The Rise and Fall of the Semitic Akkad

To the north of the Sumerians came a new race of people The Akkadians. These people were not of the same race or seed as the Sumerians, but were the first Semitic people on earth.  They were to be called Akkadians, named after their capital Akkad or Agade meaning born of Akkad. In Genesis 10:10 it mentions Akkad, pronouncing it Accad or in Greek Archad. Their God was Dagan as Akkadians were primarily monotheist. Dagan was an extremely diminutive god of the Sumerians, but rose quickly to power as God of the Akkadians. The rise of the Akkadians as a military power, and an economic force can be attributed to their King. This King line would not only prove to be militarily aggressive, but very short lived.

In the Nineveh tablets, it speaks of a Great King, called Sargon. The text is in the first person, as if Sargon is speaking. “ My mother a high priestess conceived me, in secret she brought me forth. She placed me in a basket of reeds, she closed my entrance with bitumen, she cast me upon the river.” He tells of his birth, which is illegitimate from a royal priestess. He never knows his father, but his mother is ashamed and makes a basket out of reeds, which she puts her baby in, then seals the cover with bitumen. She then puts the basket in the Euphrates river, near the palace, where the palace gardener finds him. Sargon himself says he is the son of a gardener. Before long, Sargon is chief cup holder to the King, and then through a series of events becomes King. From that point on Sargon starts a war of domination over the entire Fertile Crescent.

Moses also would have studied Sargon, who was well respected and admired in ancient times, particularity by the Babylonians who saw him as a prototype, of kingdom building. 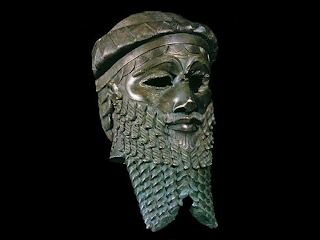 In Moses own account in Exodus 2:1-3 it compares as, “But when she could hide him no longer, she got a papyrus basket for him and coated it with tar and pitch. Then she placed the child in it and put it among the reeds along the bank of the Nile.”  Notice the account of Sargon and the Bibles account of Moses are exactly the same, even the the use of bitumen on the reed basket is the same, with the only difference being the river Euphrates being exchanged for Nile.

Was Moses too quick to transcribe Sargon's birth account without fully aware that bitumen does not exist in the Nile delta? The lower Sumer valley, today known as Kuwait, has a large supply of bitumen that seeps through the ground, from Kuwait's large oil deposits. The ancients used this heat source to smelter copper, gold and their most sought after metal, bismuth, which they mined in the neighbouring regions. Ancient people in the area also used bitumen as mortar in their temple construction. Figure above;
These are the original tiles unearthed in Babylon's main street. These tiles used Bitumen as grout which is still visible.

Contrary to Moses account, bitumen does not exist in the Nile river or the Nile delta. In Moses haste to plagiarize Sargon's birth account he failed to realize that the Nile and the Euphrates have a different geology. A simple mistake, but with huge ramifications.

Sargon the Great, as soon as he became King of Aggad, set about to become totally different in every aspects to the Sumerians, the peoples to the south, as if to mock or defy them. The Sumerian had a long and symbiotic relationship with their Great Gods, the Anunnaki. In contrast Sargon wishes to distance himself from this working relationship. Sargon imposes a new posture of defiance to the Anunnaki and their counsel. This is in total contrast to the Sumerians who were in compliance to working with the Anunnaki.  Sargon now shows by his fractious behavior, that he is against the existing Anunnaki arrangement. He now dresses as if to copy the Anunnaki, wearing the same toga style clothing, and wearing his hair long, with the long braided beards that the Anunnaki have long worn to identify them as who they are and their position on earth, as if to defy his authority. Sargon even goes further in his act of being total presumptuous against the Anunnaki and that is to wear the head dress of the Annuna, the inverted horns, signifying their exulted position. No one previously in history has ever acted in such a manner of total rebellion, and disregard against the Anunnaki.

Sargon now calls himself the, “anointed priest of Anu”. These acts of presumptuousness were now magnified by Sargon's military conquest of the Sumerian people, who the Anunnaki had a long and peaceful relationship with. The great Sumerian city of Uruk, probably the most populated city on earth at that time, was sacked and is walls dismantled, while the city of Kazalla was put to a state of total waste, that is said,  “that a bird could not find a perch.” Naram-Sin, his grandson, takes these acts of defiance a step further, by giving himself the title, Master of the Universe, and proclaiming himself a God. He is the first King in history to deify himself. For a King of earth to proclaim himself master of the universe is a direct act of contempt against the Anunnaki.

We know now that Dagan their God, was apart of this rebellion, that Dagan had assisted Sargon and his King line in their quest for an earthly Kingdom of Semites.  Sargon's own testimony states he visited and worshiped at the Holy Temple at Tuttul, the temple of Dagan.  Dagan was called in the diggings at Mari, from those recovered cuneiform texts, the “Creator of Heaven and Earth”.

Does this sound familiar? Psalm 134:3 says that Yahweh is the “Creator of Heaven and Earth.” From an almost unknown God at the time of the Sumerians, to now being the Creator of Heaven and Earth is quite a step up the ladder of expectations. Dagan wanted to extend his power and those that worshipped him, by using the forces of Sargon and his family line. Sargon's grandson Naram-Sin extended this dynasty of further conquests, but one conquest grabbed the attention of the Anunnaki, and they finally awoke to these Semite wrongdoings. This act was the destruction of the city Nippur and the sacking of the temple to Enlil, whom was the head of the Anunnaki counsel. This finally brought the condemnation of the Anunnaki against the Akkadians. The Sumerian texts speaks of a curse that was brought upon the Akkadians for their murderous acts. For many years this was thought to be a myth, but recent discoveries from diggings have proved much of this to be true. This is evident from the dig site at Tel LeiLan, which points to a drought that may have lasted upwards to 300 hundred years. This city was abandoned and from the soil samples, of a large layer of fine wind blown sand, there appears to be no human activity, for a long extended period.

Text reads:      “For the first time since cities were built and founded
The great agricultural track provided no grain
The inundated tracts produced no fish.........
People were flailing themselves for hungry”

This was called the Curse of Akkad, and now can be proven that the land, came under a large protracted drought, that lasted for many years. Enlil though, would take further steps to stop these Akkadians, in their destructive path.
The Sumerian text reads:
“Enlil the roaring storm that subjugates the entire land, the rising deluge that cannot be confronted, was considering what should be destroyed in return for wrecking of his beloved E-kur.....Enlil brought out of the mountains those who do not resemble other people, who are not reckoned as part of the land. The Gutians, an unbridled people, with human intelligence, but canine instinct and monkey's features.”

As history cannot dispute, the Gutian hordes came through the land of Akkad, and annihilated the seed of Dagan. The King line of Sargon was terminated with the death of the son of Naram-Sin. The Akkadians brief history as the dominate political force was short lived. Their great city of Agade was so completely destroyed, that it has never been found to this day, or even any evidence where that city might have been located. So total and complete was the destruction, that it ended Dagan's attempt to have his seed become the masters of the world, at least for a time.

This all seems to be confirmed, by the Sumerian King List, which kept records of the Kings and their reigns.  After the death of Car-Kali-carri, son of Naram-Sin, the King List states, “Who was King, Who indeed was King.” This indicates that there was a period after the end of the Sargon King line, that the entire area fell into political turmoil. No central government, and no ruling power or authority. With Gutian hordes sacking city after city, and the region confronting a drought of mammoth portions, it must have been a difficult period to exist.

Posted by Straw Walker at 13:43 No comments: